C.S. Lewis. We all know him. We all love him. But did you ever think about how far Lewis’s influence actually goes? Did you ever realize how he’s influenced the entertainment we enjoy today? How he’s still influencing it? Science-fiction and pop-culture owe Lewis a debt. And sometimes, they even acknowledge it.

Today, I want to take a look at three contemporary TV series that have taken the trouble of offering that acknowledgment, in one way or another. 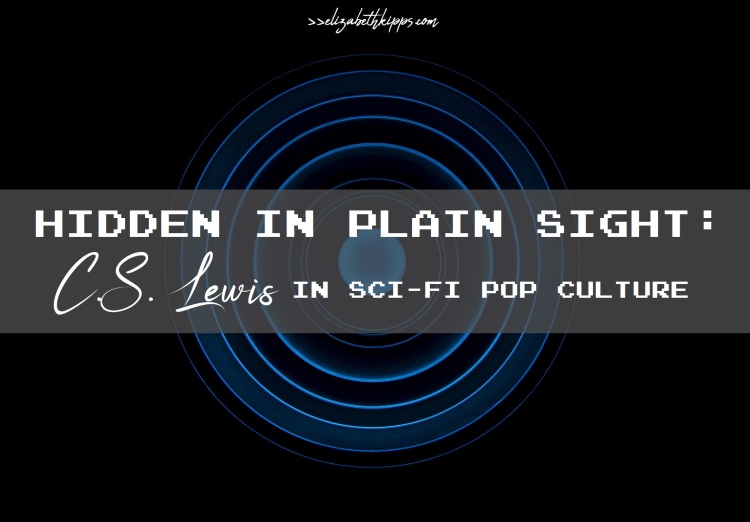 To be fair, connections to C.S. Lewis in this long-long-running British series are not exactly hidden. In BBC’s TV movie An Adventure in Space and Time, which documents the creation of Doctor Who, the show is even described as “C.S. Lewis meets H.G. Wells meets Father Christmas”. Interestingly enough, the Doctor made his first appearance on television the very day that Lewis died.

Doctor Who’s TARDIS (a space-ship/time-machine in the shape of a police telephone box, for the uninitiated), has always shared certain parallels with Lewis’s wardrobe. Both are bigger on the inside, after all.

The series’s most marked embrace of C.S. Lewis and the Chronicles of Narnia came with its 2011 Christmas special, significantly titled The Doctor, The Widow, And The Wardrobe.

The plot of said special centers around two children in World War II era England, who are spending Christmas in a rambling old house in the country and (thanks to the Doctor) pass through a magical door into another wintry world. In one of the better scenes in the special, the Doctor even throws a bone to old Professor Kirk by way of the line, “What do they teach you in schools these days?”

The similarities to The Lion, The Witch, And The Wardrobe pretty much end there. But it’s still great fun, and more than worth calling attention to.

ABC’s Lost was known throughout its 6-season run for paying homage to famous historical philosophers, scientists, literature, and the like. The show certainly never shied away from exploring themes closely related to faith, either. It took them head on.

With this in mind, it probably is not much of a surprise that they chose to honor someone like C.S. Lewis. That didn’t make me squeal any less when it happened, though.

Season four of Lost introduced viewers to Charlotte, played by actress Rebecca Mader. She is a young, British, red-headed cultural anthropologist who has made her way onto the mysterious island in the name of science (I think… it’s been a while since I’ve watched Lost). Apart from the fact that she’s British, one would not expect to find a connection to C.S. Lewis in this character.

Eventually, however, we are given Charlotte’s complete name! And that name is Charlotte Staples Lewis. Lost was always naming characters after people, but this is easily my favorite example of that practice.

Producer Damon Lindeloff said that the name offered a hint as to the direction the show would be taking in its fourth season. I guess I’ll have to revisit Lost if I want to remember where that was.

In the meantime, I haven’t forgotten this reference. And probably never will.

I saved the inspiration for this post until last.

Like Lost, the Netflix smash hit Stranger Things is known for its homage-paying. The main difference is, most of ST‘s referential glory is heaped upon the altar of the 1980’s, and horror/sci-fi icons like Stephen King. There is some pretty obvious love for Tolkien present from the first episode, but even so, I was more surprised to notice a nod to my favorite author here than in my previous two examples.

Admittedly, it’s a very slight nod. And yet, somehow, the subtlety and unexpectedness made this discovery all the more delightful.

It happens it the following scene:

Didja catch it? I will be very impressed if you did. The clip slices off a little of the top part of the shot, which I think is where I saw this nod to begin with. The whole screen is smaller than watching on Netflix. And the Slurpee debate is an amusing distraction.

Check out these screenshots, though: 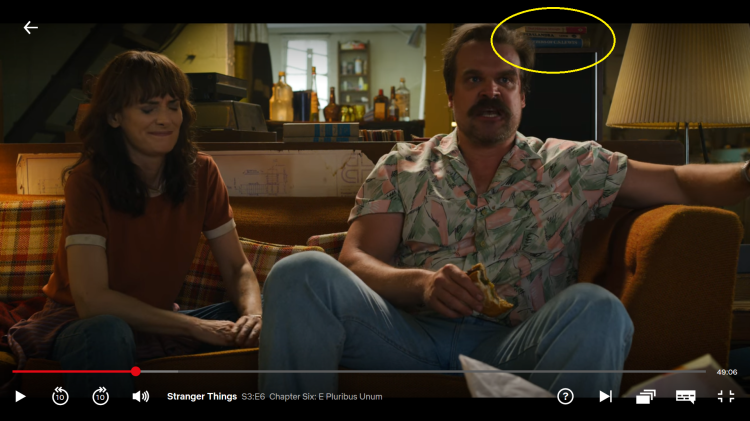 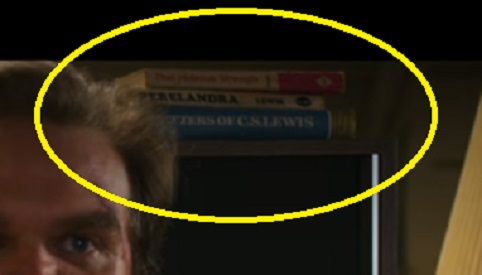 Here we have three Lewis books, in plain sight. That Hideous Strength, Perelandra, and (a bit oddly) The Letters Of C.S. Lewis. Maybe the set decorators couldn’t find a pre-1984 copy of Out Of The Silent Planet. But that’s OK, because this is still a pretty sweet little wink in Lewis’s direction.

It’s always cool to find evidence that literary genius is appreciated by the world at large.
These are just three examples. If you know of more, I’d love to be enlightened!

One thought on “Hiding in Plain Sight: C.S. Lewis in Sci-Fi Pop Culture”