I do love a good Easter egg.

Not the plastic doo-dads you hide in the yard.

Not the hard boiled versions you steep in Paas.

The sort of Easter egg I am referring to is defined by the Urban Dictionary as  “A hidden item placed in a movie, television show, or otherwise visual media for close watchers.”
An Easter egg is, in short, a little goodie tucked in to something awesome to make it awesomer. It’s like biting into a delicious chocolate cookie and discovering that there’s peanut butter inside.

I was first introduced to the delights of Easter egging by the PC game Zoo Tycoon. Thinking back, the eggs and cheats in this game were probably the best part of it. For instance, if you looked for it when the date was December 25th, you could spot Santa and his reindeer flying over your zoo. Or, if you selected a zoo guest and renamed him/her “Alfred H”, suddenly swarms of birds would appear. All the guests would start screaming and flee the park. That was always my favorite.

Imagine my delight when I discovered that such goodies existed outside the world of virtual zoos. They were all over the place. I mean, images of Mario characters appear in The Legend of Zelda: Ocarina of Time!*

These days, you can find Easter eggs just about anywhere. Lets take the many films of Pixar as an example. Why? Because the movies tend to be fantastic, and the eggs (as far as I can tell) are endless. I mean, you can Google “Pixar Easter Eggs” and find dozens and dozens of unique results. Most of Pixar’s references are to other Pixar movies. Like the Pizza Planet delivery truck, which debuted in Toy Story in 1995 (Pixar’s premier effort) and appears in almost every subsequent movie they’ve put out. This is amusing, as are the myriad of other such winks and nods (the original Toy Story’s child-villain Sid making a cameo as a garbage-collector in Toy Story 3? Voiced by the same actor? Pure gold.) My absolute favorite Pixar egg, though, does not involve Pixar referencing Pixar. It’s Pixar referencing Studio Ghibli.

Studio Ghibli (for the uninformed) is the only film company that makes animated features to rival Pixar’s. From a serious, film-conoisseur-y stand point, Ghibli is the superior of the two, but I enjoy both. Anyway, one of Ghibli’s landmark films is “My Neighbor Totoro”. It is a charming picture, released circa 1988, that features a rather large, lovable, and fluffy creature called Totoro. Here he is in one of the movie’s iconic scenes:

You really just want to hug him, right? I know I do. And guess who else does? 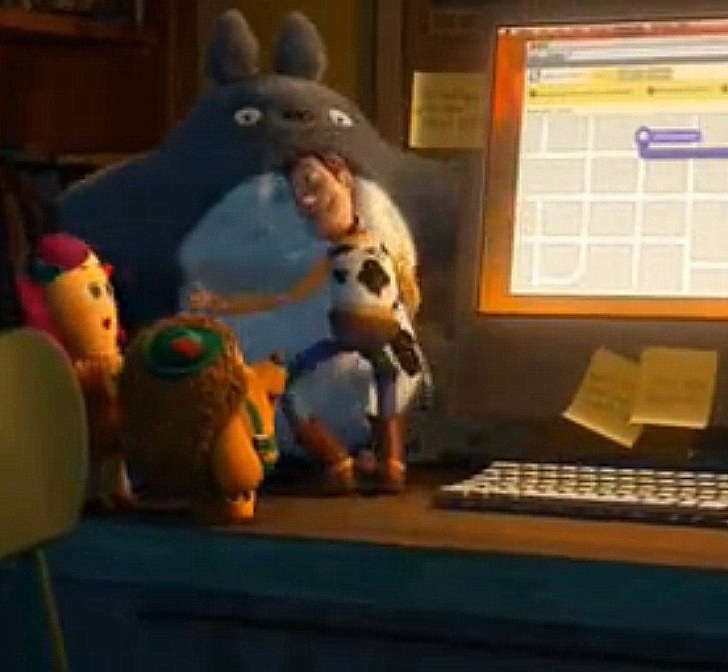 It just makes me happy.

Are you guys starting to see the delightfulness of Easter eggs yet? I hope I’m making my point. But I’m not finished yet. Because the thing that started me thinking about blogging my thoughts on these cryptic obscurities and all their glory was not a game, nor a film, nor a series. It was a novel.

I finished Jonathan Strange & Mr. Norrell, by Susanna Clarke, only yesterday and began going through withdrawal the instant the back cover closed with its sorrowful thump. At nearly 800 pages, it is a pretty sizable work. My copy is comparable in size to a dictionary, and I’ve been lugging it all around for a few weeks. It has been subject to many rave reviews, and I am bound to tell you that none of them are exaggerated. I didn’t think anything that was billed as an amalgamation of J.R.R. Tolkien and Jane Austen could possibly live up to the expectations, but it did. It’s a brilliant book. I realized this in full somewhere in the middle, when an Easter egg popped up. I wasn’t expecting an Easter egg in a novel about 19th century English magicians, which just made it all the better.

The jewel comes in the form of Mrs. Maria Bullworth, a woman who is being scammed by the nefarious Mr. Drawlight. She has essentially been disowned by her family, and is living in seclusion with a tiresome aunt. Bent on revenge, she seeks the assistance of Mr. Strange in punishing her family. She provides him with a list of those she wishes to see suffer, and the methods by which this is best to be effected. It includes her father (who, though he provides for her financially, is responsible for her banishment), her estranged husband, her scoundrel of a former lover, and a cousin (who is about to marry a clergyman and live happily ever after).

At some point when I was reading all this, I started to get a distinct sensation that it was all terribly familiar. I don’t know what Susanna Clarke’s stance on Easter eggs is. But if all this is not taken straight from the pages of Jane Austen’s Mansfield Park, then I’ll be a lemur’s auntie. Maria Bullworth = Maria Rushworth. That tiresome aunt she’s confined with shows definite flavors of Aunt Norris. So I’m thinking it’s a safe bet that the father is Sir Thomas Bertram, and the husband is Mr. Rushworth of Sotherton. And, oh joy! That would make the fortunate cousin Fanny Price, and the clergyman fiancee Edmund Bertram. It would also suggest that Mr. Lascelles (the scoundrel lover, if you’re keeping score at home) is Henry Crawford, which for some reason just freaks me out.

Mansfield Park is not my favorite Jane Austen novel. In fact, it is probably my least favorite. But Jane Austen is Jane Austen. And this is by far one of the greatest Easter eggs I have ever encountered.

Now I’m just afraid there might have been more that I missed. Guess I’ll just have to read it again sometime, right? 🙂

*I’m letting my geek flag fly today, guys. Let it be known that I rarely play video and/or computer games now that I am an adult. But let it further be known that I played the heck out of Ocarina of Time. As an adult, yes. And I will play the heck out of some Nintendo 64 Mario Part and/or Kart anytime or place someone challenges me to it.