Do you share my affinity for this 19th century literary genius? (Don’t get overly excited. I possess none of her talent, and the things on my mind have doubtless been espoused by others before me.) Or do you, perhaps, turn your nose up at Austen, dismissing her body of work as historical chick-lit? Please don’t quit reading. I want a chance to make you understand how wrong you are.

The inspiration for this post was not, in fact, any of the five brilliant novels penned by Jane Austen. Silly as it is, I often find poor literature to be more inspiring than the very best. Did you ever walk through a store and catch sight of a rack of books that just look so plain awful you wonder how they ever got published? This happens to me a lot, and always lifts my soul a little. Because, I mean, if garbage like that can end up on shelves, surely there is hope for me.

This urging to write about Jane has been borne of my latest venture into sub-par literature, namely a book entitled Old Friends and New Fancies: An Imaginary Sequel to the Novels of Jane Austen, by Sybil G. Brinton. It is billed as “an imaginary sequel”, I assume, because it was published in 1914, long before anyone had thought to invent the term “fan-fiction”.

Now, I’ve mostly avoided Austen wanna-be sequel-writers to this point in life. No one can improve upon Jane’s own near-perfection, so what’s the point? I’m not sure why I made an exception for Sybil G. Brinton. Maybe the fact that her effort is over 100 years old led me to believe it had more legitimate claims to my attention. Or maybe curiosity finally made a successful ambush on my consciousness. Whatever the case, the e-book was a mere 99-cents on Amazon, so I had little to lose.

I can’t think of a nicer way to say this. The book is… not very good. On the positive side, I suppose one might find it a acceptably diverting way to pass the time, provided one does not go in with unrealistic expectations. Judged purely as what it is (meaning: fan fiction), it’s fun enough. Naturally, there is something pleasant about revisiting familiar, beloved characters.

To my mind, unfortunately, the characters quickly ceased to feel either familiar or lovable. When did Elizabeth Bennet (now Mrs. Darcy, of course) become so meddlesome? How come Lady Catherine de Bourgh is so much more agreeable all of a sudden? Why the heck would Emma Woodhouse (now Mrs. Knightley) become BFFs with Kitty Bennet? And why are the gentlemen (with the exception of the infuriatingly demure Col. Fitzwilliam) so underwritten?

At first, I had hope the connections between the characters from different books was going to go down pretty smoothly. It’s not hard to imagine a connection between Lady Catherine and General Tilney, for instance. Or that Robert Ferrars and Mr. Yates could be besties. New connections seem to crop up with the turning of every page, though, and the more they do, the less believable they become.

As nice as it is to imagine Mrs. Darcy becoming pals with Elinor Tilney… and Anne Elliot (now Mrs. Wentworth)… AND Eleanor Dashwood (now Mrs. Ferrars)… not to mention Mary Crawford and half-a-dozen others… it all feels too forced. Misters Darcy, Knightley and Edward Ferrars, meanwhile, are nothing more than handsome accessories to their obviously more interesting wives.

The contents of Old Friends And New Fancies’s pages, though, are not the worst of it. It’s what’s not there. The ladies and gentlemen presented to us are represented as those we’ve grown to know and love, but that’s not who they are. They have the same names, sure, and speak in the same appealingly antiquated dialect. But none of them seem to have grown or changed. None possesses that spark of life, instilled in them by their original author. Miss Austen’s signature charm and wit are conspicuously absent.

The relationships conceived by Miss Brinton are paramount, but the characters involved in them are given comparatively little. This doesn’t work. Not for Brinton. Not for any writer. The people who mistake Austen for chick-lit and do not therefor read her novels would be right if her novels were like this.

I’m being harsh, I know, which I don’t like to do. Usually, I would accede that it is not fair to compare anyone to Jane Austen. But when anyone goes about borrowing her creations, it is impossible not to.

The grand thing is, reading this book has opened my eyes to just how wonderful Jane Austen’s originals truly are. Not that I didn’t know already. But you can know how amazing bacon tastes and still be amazed at its superiority when you end up eating some inferior “equivalent” made from turkey.

Jane Austen’s knowledge of human nature, her insight into the slightest of our follies and fancies, is nothing short of brilliant. Instead of being held back by the restrictions of the society in which she lived, or crippled by the quiet confines of her own everyday life, she used them as the foundations for her work. Some of her greatest strengths were drawn from her greatest disadvantages.

There are truth and wisdom to be gleaned from most classic literature. What sets Miss Austen apart from the rest, and makes her novels so infinitely readable, is her sense of humor. Her creations do not merely live and breathe. Just as important, they laugh.

While these finer qualities have obviously been lost on Jane Austen’s skeptics, I’m pretty sure they’ve been equally so on some of her fans. No doubt many of the latter are put off by the romantic inclinations and girlish effusions of the former. In writing this post, I’ve conducted a few Google searches for Austen quotes. It’s amazing how some are taken out of context. Take this offering from Northanger Abbey, for instance:

“There is nothing I would not do for those who are really my friends. I have no notion of loving people by halves, it is not my nature.”

It sounds like a nice sentiment, and people the internet over are making pretty graphics of it with flowery script, and even slapping it on greeting cards. But when one takes into account that the lines are spoken by the coquettish, conniving Isabella Thorpe, their appeal is altogether lost (at least to the discerning mind).

Here is an even worse example:

“The very first moment I beheld him, my heart was irrevocably gone.”

Romantic and sentimental, right? Um. Wrong. This quote is taken from Love And Freindship, an out-and-out farce that Miss Austen penned when she was still a teenager. It is a hilarious story, and I recommend it with all my heart. But I dare anyone to peruse the following passage and tell me with a straight face that this is something that was meant to be taken seriously: 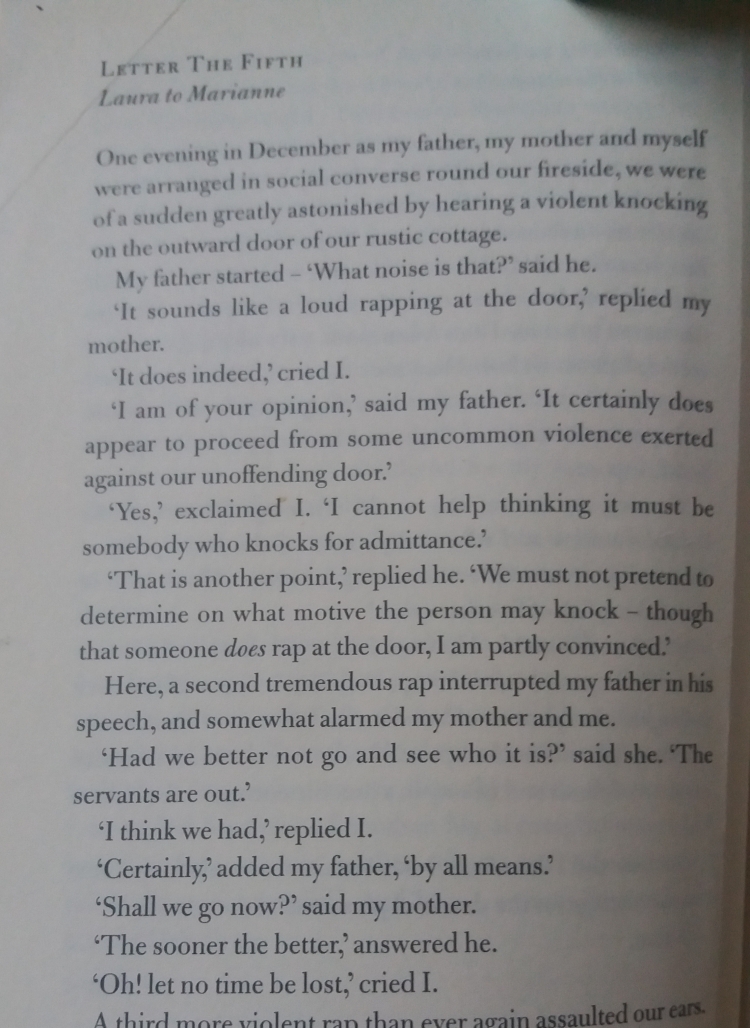 I don’t mean to throw every Austen fan-girl to the gutter. If I did, I would be an immense hypocrite. There are romantic elements to Jane Austen’s novels, and I enjoy them as much as the next girl. …Also, I might have just wandered away for ten minutes or so to look for GIFs of Colin Firth, et al. I’m not going to post any here, though, because I don’t want to undermine my point.

I could now tell you why I personally prefer Mr. Tilney to Mr. Darcy, but that’s another subject for another day.

I don’t know how this turned into a defense… no speaks better for Jane than she does for herself. She doesn’t need me to defend her. The point remains, there is so much more to Jane Austen than the happy endings. And anyone who believes otherwise would do well to consider how five little novels could endure for centuries if they were anything like so shallow.