Another month is gone, and springtime is almost over. Actually, I’m not sure what happened to Spring this year. Winter went long, and summer temperatures came early. Spring kinda went MIA.

Fortunately for the world at large, I am not at leisure to complain about the weather today. There are more important things to do. Like book reviews. 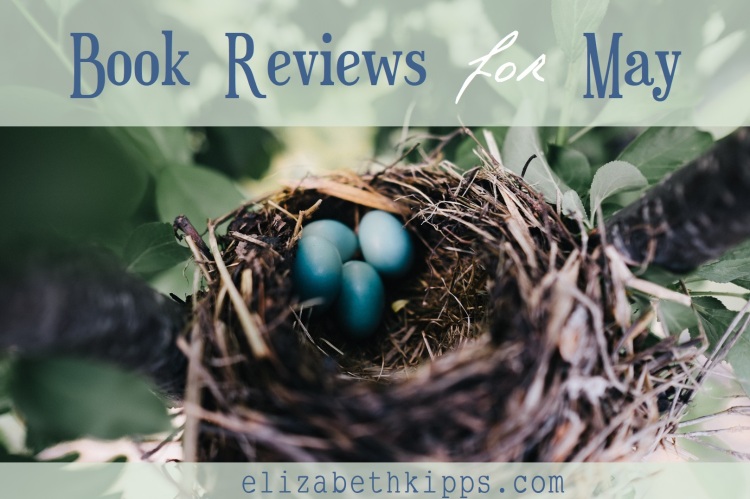 The Intolerance of Tolerance, by D.A. Carson

The dictionary definition of tolerance is as follows:

to recognize and respect (others’ beliefs, practices, etc.) without necessarily agreeing or sympathizing.

In this book, Carson aims to expose how, over the course of the past few decades, that definition has evolved into something very different. It is no longer acceptable to simply respect the rights of others to believe differently from us. The world now demands that all beliefs be treated as equally valid, pooh-poohing such antiquated notions as truth and reason.

What the author has to say is relevant. Despite the veracity of his arguments, however, this is not a book I would recommend to just anyone. Don’t read it unless you are prepared to do so with humility and discernment.

Because the exclusivity of Christian beliefs is not popular in today’s culture, it is very tempting for us to adopt an air of offense, to imagine ourselves a wounded minority. Carson includes dozens of real-life examples of the decline of true tolerance in favor of the new tolerance. One such example:

In 2005, the Co-operative Bank, based in Manchester, England, asked a Christian organization, Christian Voice, to close its accounts at the Bank because its views were “incompatible” with the position of the Bank. The public statement of the Bank reads as follows: “It has come to the bank’s attention that Christian Voice is engaged in discriminatory pronouncements based on the grounds of sexual orientation… This public stance is incompatible with the position of the Co-operative Bank, which publicly supports diversity and dignity in all forms for our staff, customers, and other stakeholders.” Thus, in the name of supporting diversity, the Bank eliminates one of its diverse customers! Even here it cannot be consistent: the Bank doubtless has Muslim customers who are no less willing than Christian Voice to condemn homosexual practice.

Almost any Christian who reads this excerpt (myself included) will probably want to give in to a sense righteous indignation. How dare the world discriminate against us? It is illogical! It is unjust! Let us stomp our feet and growl as loud as we can!

The real problem is, we aren’t called to do any of these things. Scripture does not tell us that our lives in this world will be fair. It does not say that following Christ is supposed to make us popular. It doesn’t recommend responding with heated words and hurt feelings when we are treated less than respectfully. What the Bible DOES say is pretty much the opposite of all those things. For instance:

Beloved, do not be surprised at the fiery trial when it comes upon you to test you, as though something strange were happening to you. But rejoice insofar as you share Christ’s sufferings, that you may also rejoice and be glad when his glory is revealed. If you are insulted for the name of Christ, you are blessed, because the Spirit of glory and of God rests upon you.
1 Peter 4v12-14

Repay no one evil for evil, but give thought to do what is honorable in the sight of all. If possible, so far as it depends on you, live peaceably with all. Beloved, never avenge yourselves, but leave it to the wrath of God, for it is written, “Vengeance is mine, I will repay, says the Lord.” To the contrary, “if your enemy is hungry, feed him; if he is thirsty, give him something to drink; for by so doing you will heap burning coals on his head.” Do not be overcome by evil, but overcome evil with good.
Romans 12v17-22

There are lots, lots more. Look it up.

It’s kind of a joke to even think of ourselves as persecuted. I don’t think Christians in our culture have a concept of what the word really means. We worry about people not liking us, when our brothers and sisters around the world (and throughout history) have had to think about slightly more inconvenient things, like being tortured, imprisoned, and/or killed for their faith.

Read this book if you will. Carson has many worthwhile points to make. I only suggest that you do so with caution.

The Scent of Water: Grace For Every Kind of Broken, by Naomi Zacharias

To continue a bit in the same strain as above, if you’re looking for some prime examples as to how the average Westernized citizen doesn’t know the true meaning of suffering, there are plenty of good examples in The Scent of Water.

Naomi Zacharias, daughter of renowned Christian apologist Ravi Zacharias, weaves her own story together with those of multiple other women from around the world. She takes us around the world, to the brothels of Mumbai, to a South African prison, to Amsterdam’s red-light district, to post-tsunami Sumatra. Each woman we are introduced to has endured unimaginable horrors, yet their stories are not ultimately defined by suffering. Each is tied together by the threads of hope and grace.

There isn’t much in the way of cohesive narrative or organization in this book, which may deter some readers. I also saw a review or two lamenting that Zacharias gives no forthright proclamation of the gospel message. I still recommend the book to those who aren’t overly fussy about such things, and who take an interest in the lives and struggles of our sisters around the world.

The Soul of the Lion Witch, & the Wardrobe, by Gene Edward Veith Jr.

The first half of this book is basically just an analysis of The Lion, The Witch, & The Wardrobe, explaining how it mirrors the gospel message. Though not poorly done, it isn’t exactly groundbreaking, either. Veith’s tone is somewhat exclusive, leading me to believe this was not written for the benefit of those outside the Christian faith. As most Christians are already familiar with the allegorical themes in the Chronicles of Narnia, I’m not entirely sure what the point was.

The second half of the book draws comparisons between Narnia and the more recent fantasy worlds created by J.K. Rowling and Phillip Pullman. The former struck me as equal parts ridiculous and unnecessary. Veith’s summary of the Harry Potter books was so off base, I question whether he has read them at all. In his own words, HP is ultimately about “the struggle for popularity”, and readers have fallen in love with Rowling’s wizarding world because it facilitates their “fantasizing about being popular and successful”. Those are exact quotes. Whether you like HP or not, that anyone could really read the books and come away with that conclusion is absolutely, well…

Having never cared to visit the His Dark Materials series, I can’t really comment on that bit. It did at least contain actual quotes from Pullman and passages from the books (more than can be said of the HP section).

Bottom line: This one’s skippable, folks. There are better books on similar subjects out there. Read one of those instead.

Note: If it looks like I’m slacking by having only read three books in the month of May, please be aware that I embarked on the 600+ page epic Ben-Hur a week or so ago.

2 thoughts on “Book Reviews For May”