“Sire,” said Tirian … “if I have read the chronicles aright, there should be another. Has not your Majesty two sisters? Where is Queen Susan?”
“My sister Susan,” answered Peter shortly and gravely, “is no longer a friend of Narnia.”
“Yes,” said Eustace, “and whenever you’ve tried to get her to come and talk about Narnia or do anything about Narnia, she says ‘What wonderful memories you have! Fancy your still thinking about all those funny games we used to play when we were children.’”
“Oh, Susan!” said Jill. “She’s interested in nothing nowadays except nylons and lipstick and invitations. She always was a jolly sight too keen on being grown-up.”
“Grown-up, indeed,” said the Lady Polly. “I wish she would grow up. She wasted all her school time wanting to be the age she is now, and she’ll waste all the rest of her life trying to stay that age. Her whole idea is to race on to the silliest time of one’s life as quick as she can and then stop there as long as she can.”

The Last Battle, by C.S. Lewis 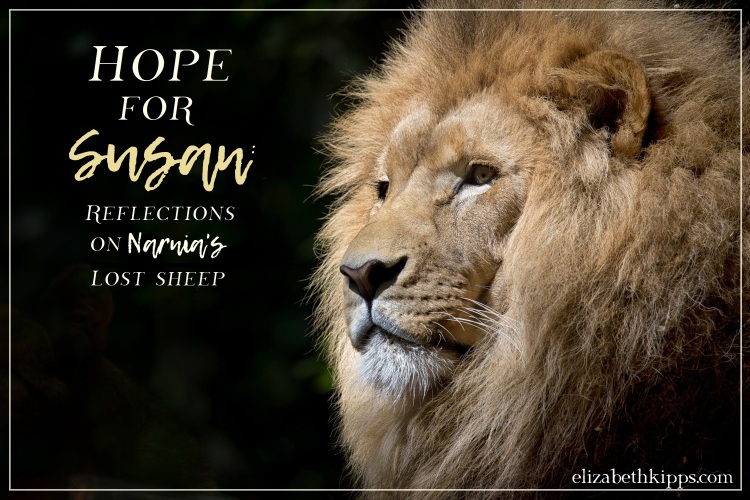 Not long ago, it came to my attention that the passage quoted above has inspired a fair amount of controversy over the years. If it’s been a while since you’ve read The Chronicles of Narnia, or if you’ve been living under a rock and never read them all, let me summarize the situation briefly, for context. (Then you need to go read— or reread— these beautiful classics).

In the first few books of the Chronicles, we are introduced to the four Pevensie children: Peter, Susan, Edmund, and Lucy. They share a variety of adventures in a magical land called Narnia, and meet the lion Aslan (whom probably even the under-a-rock people will know is a representation of Christ). As happens in any good story, we grow interested in all these characters and come to feel affection for them. In the seventh and last volume, it is therefore a shock and disappointment to learn that Susan has scorned Narnia, and is not among the others who go on to reach “Aslan’s country” (basically, Heaven).

I always looked upon this as a sad excerpt. I had grown attached to Susan, like all the other characters, and grieved to learn she became a lost sheep. Ultimately, however, the grief for Susan is overwhelmed by the joy I feel as I read of the others entering into Eternal life. The concluding chapters of The Last Battle are among the most meaningful passages in all of fiction to me. They fill my heart with an abundance of joy and hope— even for Susan.

What I never realized until recently was that Susan’s exclusion here has been the cause, not just for sadness, but for out-and-out ire among a great many readers. You’ve probably heard of some of them, too.

J.K. Rowling, for instance, had this to say:

“There comes a point where Susan, who was the older girl, is lost to Narnia because she becomes interested in lipstick. She’s become irreligious basically because she found sex. I have a big problem with that”.

Then there’s Philip Pullman. Given his very open hatred for Narnia, I am not inclined to credit his opinions (on Susan or anything else). I’m including his words here merely to further demonstrate this rather popular viewpoint.

“Susan, like Cinderella, is undergoing a transition from one phase of her life to another. Lewis didn’t approve of that. He didn’t like women in general, or sexuality at all, at least at the stage in his life when he wrote the Narnia books. He was frightened and appalled at the notion of wanting to grow up.”

“I just don’t like the conclusions Lewis comes to, after all that analysis, the way he shuts children out from heaven, or whatever it is, on the grounds that the one girl is interested in boys. She’s a teenager! Ah, it’s terrible: Sex — can’t have that.”

Renowned fantasy author Neil Gaiman was so disturbed by Lewis’s treatment of the second eldest Pevensie that he actually wrote a whole short story about it. I was so disturbed by an excerpt of said short-story that I plan to never-ever read the whole thing, and caution my readers against even looking it up. Doubtless, Gaiman has some interesting and thought-provoking points to make, but I’m not going to sift through them if it means having to digest such fantastically offensive imagery, as well. Though I have enjoyed certain of Gaiman’s work in the past, this made me feel like I need to soak my imagination in bleach.

The point is, a lot of people are upset— really upset— by Susan’s fate. I will concede that it is worth being upset about. It is sad. Very sad. But I also hold that the three examples above misunderstand what Lewis had to say about Susan in the end. Probably because they misunderstand Christianity.

God is love. Anyone can tell you that, whether they believe it or not. Less universal is the concept that God is also holy and just. Susan’s exclusion from Aslan’s Country in The Last Battle is not, as some would have it, a punishment. To bring her to a place she had no desire to be, on the other hand, would have been just that. God gives us free will. He does not force us into relationship with Him.

Susan isn’t barred from Aslan’s Country because Aslan is mean, cruel, or unjust. It is for precisely the opposite reasons. It is because she does not want to go there, and because He has honored that desire.

This brings us to the point of conflict about what Susan’s desires actually are. Rowling and Pullman feel she has been condemned based on her interest in lipstick and sex. But I am confident that this is not what Lewis meant.

Wearing lipstick is not a damnable sin. I don’t believe it is a sin at all. I wear lipstick and enjoy getting gussied up every now and again. Lewis himself did not condemn girlish interests, as this extract from The Horse And His Boy demonstrates:

“They [Lucy and Aravis] liked each other at once and soon went away together to talk about Aravis’s bedroom and Aravis’s boudoir and about getting clothes for her, and all the sort of things girls do talk about on such an occasion.”

Clearly nothing sinister or evil is inherently present in such doings. Not from my point of view, or Lewis’s, or any reasonable Christian.

The trouble comes when those things are given a larger role in our lives than they were meant to occupy. It’s the same with anything. Food, drink, sex, careers, hobbies. All these are good things, but they were all created to be enjoyed in a certain context. They were not created to be the driving purpose of our lives. Only Christ should hold that all-important position.

Even someone coming from a secular point of view ought to be willing to acknowledge the silliness of Susan’s making boys and lipstick the center of her existence.

Susan has chosen temporary gratification over eternal joy. But it does not follow that all hope must be lost for Susan. Even in the temporal world we live in, the frivolities to which she has given herself will not last. Her beauty and popularity will fade. She will grow old. I like to believe she will grow wise, as well. With the worthless things she valued stripped away, perhaps Susan’s memory will take her back to Narnia, to the family she’s lost, and above all to Aslan. You can be sure that Aslan will be waiting joyfully to welcome her home, if and when it does.

Lewis himself had this to say:

“The books don’t tell us what happened to Susan. She is left alive in this world at the end, having by then turned into a rather silly, conceited young woman. But there’s plenty of time for her to mend and perhaps she will get to Aslan’s country in the end… in her own way.”

It’s worth noting that, when young readers wrote to Lewis, hoping he meant to write more books about Narnia, he would respond by encouraging them to continue the stories on their own. I take that as a license to hold out hope for Susan, and to imagine an ending for her as perfect as that her brothers and sister were given. The kind of ending that isn’t really an ending at all.