If my research is correct, one of the less exciting prospects of becoming a self-published author is that one must be positive about everything. Everything. So if I don’t care for a book, or a movie, or a certain brand of toothpaste, I will no longer be able to publicly declare so. It will make me look like Debbie Downer, and no one will be interested in anything else I have to say (or so the theory goes).

Which essentially means that the review posts that have been my bread and butter for the past year or so aren’t going to cut it anymore. From this point on, I’m probably only going to tell you guys about something if I really like it, and have enough reasons WHY I like it to comprise an entire post.

At first, this struck me as kind of a bummer. But it’s only the first week of January, and guess what? I already found a film I liked so much I have to tell everyone about it! See, I knew 2020 was going to be a great year.

Until I can think of a better title for my all new, all positive, all the time review posts, they’ll be filed under the heading, “Liz Recommends”. And so, without further preamble, allow me to tell you why I recommend the Rian Johnson whodunit Knives Out.

Note: This is a spoilers free review (unless revealing that it has a positive ending is a spoiler. In that case… oops).

Knives Out is a modern-day mystery that has been lovingly crafted in the style of the classics. It takes every possible opportunity to tip its deerstalker to Sherlock Holmes, Agatha Christie, Angela Lansbury… heck, even Choose Your Own Adventure. The plot is as old as the genre itself. A dead patriarch. A rambling old house in the country. A large family, all of whom had motives for murder…

I could give you a more detailed synopsis. OR, I could just show you the trailer. If a picture is worth a thousand words, a video must be even more valuable, so let’s go with that.

Even from the trailer, it is obvious that Rian Johnson has succeeded in taking a well-worn trope and crafting it into something deliciously fresh. Knives Out obviously has a superb ensemble cast (a requirement for any whodunit worth its weight in paperbacks). The twists and turns don’t necessarily shock, but they do satisfy, and that’s better anyway. The visuals pop off the screen. The execution is slick, smart, snappy.

This flick’s got style. Not to mention humor and class.

What is all the more exceptional (especially for a critically acclaimed Hollywood production) this flick’s also got substance.

Knives Out has already generated plenty of awards buzz, and received a handful of Golden Globe nominations. How often do movies in that category leave a smile on your face as you exit the theater? Not only is the ending pleasing in a story-telling sense, it genuinely made me feel good. This wasn’t just because the mystery had been solved and all the loose ends neatly tied up. Plenty of stories and movies give viewers that and still leave a bland or bitter taste in our mouths.

Knives Out stands out, in my opinion, because truth and goodness emerge victorious over greed and enmity. It’s almost like an old wives tale or fairy story in that the virtuous are rewarded, while the wicked get their just desserts.

So what we’ve been given in Knives Out is not just cinema that looks good and feels good. By golly, is really IS good. Further and final kudos to this splendid film for: 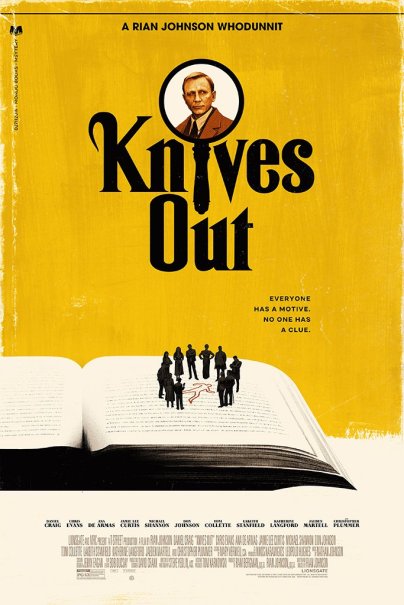