“I’m so glad I live in a world where there are Octobers.”
-L.M. Montgomery (Anne of Green Gables)

By the books, it’s been an eclectic month. I’ve been from North Korea, to fairy land, to ancient Egypt, to dystopia. There’s no frigate like a book, as Emily Dickinson reminded us. Meanwhile, it’s actually gotten around to feeling a lot like autumn.

Check out my reviews for October, then go enjoy it. 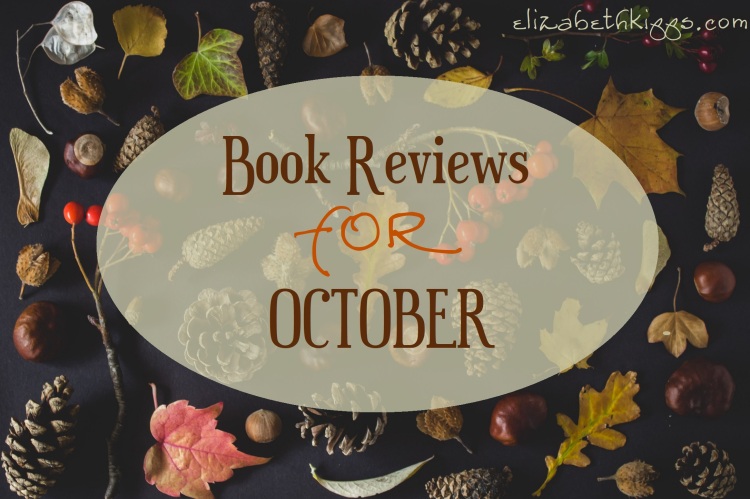 This is one of those reads I want to just pepper with adjectives. It was spellbinding. Tragic. Moving. Chilling. Suspenseful. Intense. Lyrical. Inspiring. Heart rending. The writing is as beautiful as the story is compelling.

“Dear Leader” is the seventh book centered around North Korea that I’ve read in two years. Mostly, I’ve stuck to defector stories, being endlessly fascinated by how ordinary people live in the DPRK, and how a fortunate minority have managed to escape. The inner workings of the government are of less interest to me. As a highly privileged (by DPRK standards) poet and counter-intelligence agent, Mr. Jang offers heaps of information about the latter. I admit to skimming some of these passages, though others likely find them to be the most engrossing part of the book. For my part, I was thoroughly enraptured by Jang’s account of his life in North Korea, his pursuit of truth, and his harrowing escape.

One thing that has really convicted me over the course of my reading on this subject is the portrayal of Christian (or perhaps I might say, “Christian”) attitudes towards North Korean escapees. In “Dear Leader”, the author describes being directed to two different churches with the promise of their help. In both cases, his supplications were hatefully and forcefully refused. In other accounts, I have read of defectors being extorted by “missionaries” who refuse aid unless they convert.

These are not prejudiced anecdotes related to make Christians look bad, as one might expect to find in certain quarters these days. No, they are honest stories of real individuals, related without the taint of bitterness or conceit. They are convicting and thought-provoking.

Are we, as Christians, willing to help the helpless, even if it means risking our own security? Apparently, for the majority, the answer is a resounding no. What is sadder, I don’t think a lot of us in free countries are willing the help the helpless, even when it poses no risk to us at all. “Dear Leader” and other narratives of its kind are a challenge to live out our faith more truly and boldly.

For that, even if for no other reason, I am glad to have read this remarkable book.

The Witch’s Boy, by Michael Gruber

Three of my favorite components to any story include snarky prose, fairy-talishness, and redemptive themes. This book, The Witch’s Boy, relies heavily on all three and yet I did not love it. In fact, I did not even like it.

The snarky prose dissipates into plain darkness after a few chapters. The incorporation of various classic fairy-tales and characters feels clunky and forced. Nor did I care enough about the title character to celebrate his ultimate redemption.

There is no clear line between good and evil, which doesn’t sit well with me. Witches are presented as predominantly good. But what is good, in this world? A pair of characters based on Hansel and Gretel are “good”, too. It is revealed that they basically cannibalized their own father, but hey. He was a jerk, so I guess that makes it alright.

The author attempts a number of things that are hard to pull off just right— a talking cat, for instance, and a blend of lightheartedness and dark themes— and, well… he doesn’t pull them off. He also attempts to turn the classic roles of hero/heroine and villain on their heads. This works in stories like Neil Gaiman’s The Sleeper & The Spindle. Again, I’m afraid, not so here. Perhaps had the focus been narrowed, The Witch’s Boy would have fared better in my esteem.

Then again… maybe not

Seal of the Sand Dweller, by R. Rushing

Fact one: The story of Joseph is my favorite of the Old Testament.

Fact two: R. Rushing’s “Seal of the Sand Dweller” is a novelization of that story.

Fact three: It was absolutely nothing like what I would have originally expected from such an endeavor.

Fact four: It was infinitely better.

This is a true epic, folks. Rushing begins her narrative not not with the coat of many colors or brotherly betrayal, but in the Egyptian court with Joseph (Yoseph) interpreting the king’s dream. From here, a richly detailed and intricately woven story unfolds. It is familiar, yet surprising… formidable (at over 500 pages) yet seductive.

Follow the link to go and get you a copy.

Into The Embers by Jacqueline Brown

This is the fourth installment of Brown’s The Light series, and probably the weakest. It didn’t offer much in the way of plot or action, but felt more like a bridge between the last book and what will follow after. Most of the focus ended up being on the romance… not my personal favorite aspect (in The Light, or most other books). This isn’t intended as an insult to Brown, or any other writer. My standards are just astronomically high when it comes to fictional love.

A fair amount of moral exploration also found its way into this one, mostly in the form of dialogue. The author has thought provoking ideas to share on everything from objective truth, to good and evil, to marriage. I’ve always admired her focus on personal and moral themes in the dystopian setting. Somehow, all the puzzle pieces in this once just didn’t fit together quite right for me.

Nevertheless, I remain a fan of the series and look forward to the next (final?!) book.

While this review may sound negative, I definitely still recommend this series to those who enjoy dystopian and Christian fiction. Click away to give it a gander.